Part of our Student Conferences is giving the students an opportunity to share their faith in the community where the conference is held.  They are armed with a short 5-question inoffensive survey to open a conversation, a Connecting with God booklet that talks about Jesus and having a person relationship with Him, and the Holy Spirit!   We’ll take the students to a mall, on the beach or even to area neighborhoods.

This story is about an outreach at one of our conferences and a student’s experience in sharing Jesus.

This student’s life (and the lives of the girls at McDonalds) will never be the same because she experienced the Holy Spirit working through her to bring someone to Christ.  Thank you for making it possible for us to be on the field, hold these conferences, and give students opportunities to share.  Lives are changed because you are faithful.

A Student Experiences God at Work 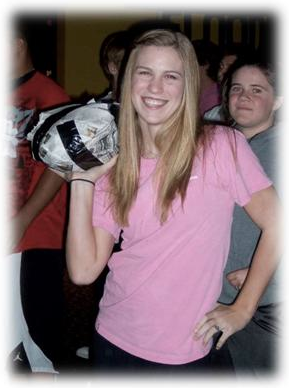 Mackenzie is a senior at Plano HS and went to our FastBreak Winter Conference.  Here is her story about sharing Jesus...

"When the Student Venture bus dropped me and the other campers off at a McDonald's in South Dallas, I wasn’t super excited to share the Gospel with strangers. In fact, there was a spiritual battle raging in my heart and I felt very discouraged. It was my 6th outreach with Student Venture and I had never experienced a stranger accepting Christ.

I always have trouble initiating a conversation, so this year I decided to use the MLK- themed survey to start conversations. This particular outreach I felt very successful in the conversations that my bi-lingual partner, Vidi, and I had with shoppers and employees at the local Fiesta supermarket. Although all the people we talked to considered themselves Christians, none of them had ever heard about having a personal relationship with God. Vidi and I got to explain the gospel to them and they let us pray for them, but none of them were comfortable saying the prayer themselves at that moment. Already the outreach was going better than I had ever experienced before, and it was only going to get better from there!

As all of the Plano and Carrolton students were gathering in front of McDonalds waiting for the bus, my good friend Bola spotted two teenage girls that she wanted to talk to and asked me to go with her. We awkwardly began by asking them the first three survey questions and asked them if they knew that God wanted to have a personal relationship with them;one of the girls said no and the other said yes. So we continued sharing the gospel with them, making it clear that God wants them as they are, and that we can only depend on Jesus’ death on the cross for salvation. As the bus pulled up to the edge of the street, one of the girls accepted Christ and the other rededicated her life to Christ.

I felt very excited as I walked onto the bus because although I was physically there and technically I shared the Gospel with the two girls, it wasn’t me at all. God had done all the work by preparing the girls’ hearts beforehand and speaking to them through me and Bola. I realized that this outreach went so well because I was trusting God to speak through me instead of trying so hard to share the good news in my own strength."
Posted by Howard and Laura at 3:24 PM