There is nothing more exciting and rewarding to me than seeing a teenager move from darkness into light, from aimlessly wandering through life chasing empty pursuits to having meaning and purpose. That's what we get to see in Student Venture. And there's nothing like it.

Try to remember what your life was like before you had a close, intimate relationship with Christ. Remember the incredible joy and peace when you finally understood the Gospel and placed your faith in Christ. What an unbelievable privilege we have to help teenagers come into this same relationship. I've included a story below about a teenager named Josh who had achieved great success but knew that something was still missing in his life until he placed his faith in Christ.

We're almost to our final deadline to apply for one of our U.S. summer projects but still have some spots available, especially for guys. If you know someone who has a heart for reaching teenagers and wants to invest their summer in something that will make an eternal difference, tell them to visit: http://SummerVenture.com to apply for one of these life-changing projects.

Yours for reaching teenagers for Christ,

JOSH'S CHANGED LIFE STORY:
During this past fall, we had an outreach for the freshman football team at Loveland High School in Cincinnati, Ohio. Lots of guys came out, the outreach went well and, as always, some of the guys came to faith in Christ. We started a follow up Bible study, called "Cross Training", with the guys who were interested. One of those was a guy named Josh Lay. Josh is an incredible athlete. As a freshman in a school of around 1,400 students, he is the starting quarterback on the freshman football team, on the varsity baseball team and a varsity wrestler. Josh, however, had not attended church since he was around 3 and had very little spiritual background.

During the second week of the study, we talked about assurance of salvation. In other words, how do you know that you are going to heaven when you die? At the end of the study, Daniel McKee, Student Venture staff member, went around the room and asked each guy what he had learned that night. When he got to Josh, Josh had tears in his eyes. He just said, "Will you guys pray with me? God, I don't want to try to do life on my own anymore. I trust you to save me from my sins. I receive you as my savior. Amen." Well, the guys went nuts for a while after he finished praying. Everyone was so excited to have been a part of seeing their buddy, Josh, place his faith in Christ.

It seems the light bulb has come on for Josh and he is just growing like crazy. He learned how to share his faith in Christ at a training we had one Sunday and the next day, he led a friend to Christ in math class. Then he went home that night and led his two brothers to Christ. He continues to share his faith regularly. Although Josh was very successful in sports he was still searching for something more. Now that he has experienced Christ, he can't stop sharing the Gospel with all of his friends. He has been talking with one friend for some time and, two weeks ago, gave him a "Connecting With God" booklet. That night his friend went home, talked with his parents, and placed his faith in Christ with them.

This is what Student Venture is all about. We help students come to faith in Christ and then help them multiply that faith into the lives of those around them, using the natural sphere of influence that God has given them.
Posted by Howard and Laura at 3:09 PM No comments: 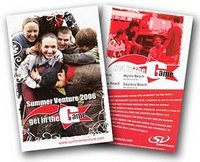 We have created 6 summer project options for college students to participate this summer. Each gives them an opportunity to get their feet wet and see if SV would be the place for them to serve after they graduate. Please pray for qualified students to apply for our summer venture projects ASAP!

We have lots of spots still left on all the projects and really are looking for those applicants who have good staff potential.

For more information, check out:
http://www.summerventure.com

Posted by Howard and Laura at 9:14 AM No comments:

Laura and I were leading the ministry in Carrollton, TX for years before transitioning to our current recruiting role in Orlando. We had to transition most of the ownership of the ministry to our student disciples and two staff who focused on the Carrollton ministry part-time. The following story of several Newman Smith High School students in Carrollton really encapsulates what we are trusting the Lord to do through this ministry. Thank you for praying this through!

Jared Lyons, a freshmen at the time, got plugged into Student Venture through a football outreach I led. He later attended our summer conference (Rocky Mountain Getaway) in 2002 and recommitted his life to Christ. He then began to help disciple an upcoming freshmen student, Matt Rucker, for the next three years. Matt attended the Rocky Mountain Getaway in 2003 and recommitted his life to Christ, and began to co-lead a student bible study with Jared in 2004 and 2005. During this time, Matt and Jared saw many students come to Christ and they began to follow them up in their weekly bible study. One of those students who started attending their bible study was Jorge. Jorge had been dating Jenny for 2 years, but then Jenny attended our winter conference, Fastbreak) in January of 2005,and after rededicating her life to Christ, called off her relationship with Jorge because Jenny was a Christian and Jorge was not. Jenny began sharing Christ with all of her friends and saw several of them place their faith in Christ and began a bible study that she helped to organize. Recently she led her atheist friend to Christ!

Anyway, two weeks after the break-up with Jenny, Jorge attended a Super Bowl outreach where Jenny helped share the Gospel message to the 80 students who attended. Although he indicated a decision to receive Christ, he really was not sincere. Several months later, and after he would avoid getting together with Jared and Tom (SV staff guy) for follow up, he attended a student –led bible study led by Matt Rucker in September of 2005. When Matt saw that there were several new non-Christians attending his study, he abandoned the bible study content for the day and shared the Gospel and Jorge sincerely trusted in Christ that afternoon. He then began coming to the weekly bible study, attending church, and growing in his faith. He then went to Fastbreak in mid January ‘06 where he really caught a vision for reaching his campus for Christ after he led 4 students to Christ on the day of outreach!

1 month ago, his good friend Ozzie (a senior and the father of a 6 month boy), came to Christ after Jorge witnessed to him and brought him to a church camp. Ozzie began coming to a weekly SV bible study with Jorge, and a short time later Jorge and Ozzie decided that they would start a weekly bible study group for their non-Christian friends. Eddie, their good friend and a non-Christian, has been attending the study, and although he initially resisted the Gospel, just came to Christ two weeks ago after Jorge invited him to attend a Christian event!!

Because of your partnership, five generations of spiritual multiplication is happening, and the chain is in it’s infancy! Please pray this vision of multiplication would expand to reach the entire campus, their families, and ultimately the world!
Posted by Howard and Laura at 1:10 PM No comments: 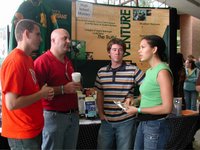 The Fusion+Orlando Conference invited Student Venture to present our ministry opportunities to the 1200 attendees. We were one of many ministries, but we had some good conversations with potential candidates. Pray those we spoke with will contemplate how they could be a part of our team leading them to pursue the next steps.
Posted by Howard and Laura at 8:57 PM No comments: