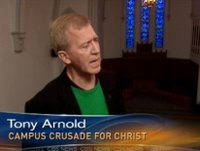 ©MMVI, CBS Broadcasting Inc. All Rights Reserved.
Posted by Howard and Laura at 9:31 AM 3 comments: Links to this post

An example of the fruits of recruiting

Here is an encouraging blurb from one of our new staff who joined SV as a direct result of my online recruiting initiative:

"I am so thankful for the Student Venture internet job posting. I would have never known that I could serve God by utilizing my gifts in finance and administration as well as spend time ministering to students face to face at their high school. What a blessing to be able to use my gifts, talents, and desires to serve God’s kingdom and see high school students reached for Jesus. Thanks Howard, your diligent work has provided an opportunity for me to serve God that I would have never known was available. - Scott B/Student Venture - Finance"

Please pray many others like Scott will find out about SV through the internet, see how their professional skills could be used in the context of ministry, causing them to apply to join staff.
Posted by Howard and Laura at 2:31 PM No comments: Links to this post

Email ThisBlogThis!Share to TwitterShare to FacebookShare to Pinterest
Labels: recruiting

Here is a snap shot of our ministry’s statistics: (These numbers do not include conferences for the summer. They do include all cities reports through the end of October except for 3 cities, whose reports only went through the end of September.)

49,923 = Personally heard gospel (including direct field ministry, internet, and summer projects)
7,455 = Indicated decisions for Christ
1,688 = Total students in Student Venture discipleship groups
Posted by Howard and Laura at 10:16 AM No comments: Links to this post